I’m working on the visualisation of internal forces inside an element and I’m enjoying a lot the Bokeh package and I thank you for the great work. For the representation of forces, your Arrow model works perfectly but I’m having some problems representing the bending moment (a curved arrow). Will you implement it? There is already a way to draw it?

In the worst case scenario, I was thinking to draw it manually (patch for the head and line with the function of a semi-circle), but I’m asking to the community because probably I’m not the first person encountering this challenge (and surely not the last one).

Thank you very much.

Arrows are currently very simple annotations with a straight-line shaft between start/end points, and furthermore, the assumption that the arrowheads are angled along this line’s direction is baked in to the source code. We would probably need to add a new model, PathArrow or Pointer or something for this, and also figure out some questions like how to orient arrow heads when the path is curved. I can’t find a relevant existing discussion so I’d suggest you open a GitHub Issue to propose this feature.

Overkill here, but as a workaround you could make a spiral and a directional arrow basically leveraging polar coords and the equation r=theta: 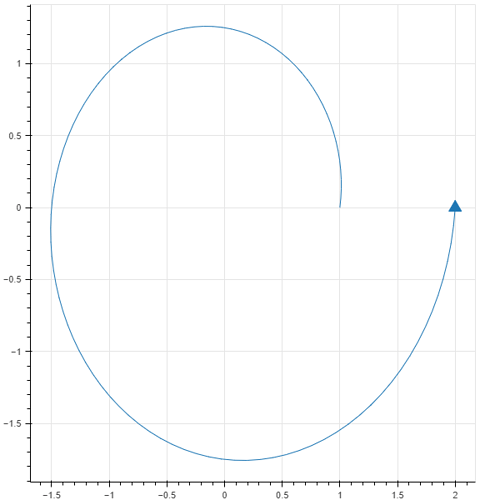 Nice workaround! I am never not amazed by the ingenuity of our users

Thank you very much, this is will do the trick. I also crated the GitHub issue as requested [FEATURE] Curved Arrow · Issue #12072 · bokeh/bokeh · GitHub