Taking inspiration from the Gapminder project implemented using Bokeh, I was trying to update the colors of the states on the US map based on the amount of fuel consumed by electric vehicles within the year range determined by the range slider and subsequently create an animation.

However, I’m running into the following issue: While the slider callback updates the color values for each patch in the ColumnDataSource, it does not plot the updated data on the map.

I have attached a screenshot of the map plotted so far, and a well-commented zip file containing the data and a Jupyter Notebook. 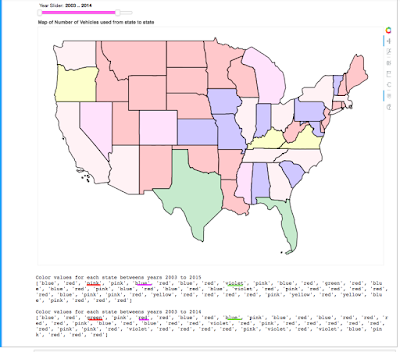 Any help would be appreciated. Thank you!

Next, you are replacing the entire CDS in your update. Don’t do this. The Bokeh CDS is a central but heavyweight piece of machinery. Instead of replacing entire CDS objects, you should only set the .data property of an existing CDS. This is how all of the documentation and examples demonstrate doing things, e,g.