how to use with jupyter notebook?

Hi all, Thanks for Bokeh! I have been able to create some pretty cool visualizations just after a couple of days of learning. Now I figure it would be fun to learn Jupyter notebook (which I really know nothing about).

Going from your docs where it says:

To display Bokeh plots inline in an Jupyter notebook, use the output_notebook() function from bokeh.io instead of (or in addition to) the output_file() function we have seen previously. No other modifications are required. You can see an example below:

I modified one of the example scripts accordingly:

Now how do I load that into my notebook? I have installed jupyer and I see:

The Jupyter Notebook is running at: http://localhost:8888/

When I run the python script, I just see this warning and nothing displays.

BokehJS does not appear to have successfully loaded. If loading BokehJS from CDN, this
may be due to a slow or bad network connection. Possible fixes:

Hi Rakesh, OK great- so how do you start it? How do you launch the script and get it to appear in your notebook? 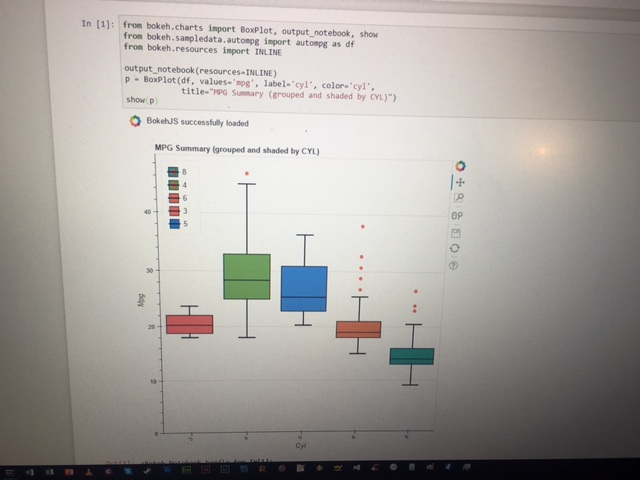 I would suggest updating all required libs to the latest version.

Thanks Rakesh, I was able to get it working. I did a conda update
--all, but that didn't fix it. Then I fiddled around with the
notebook, and if I press interrupt kernel button, then run cell again,
then the bokeh graph displays. Not sure why it has problems at start.
Anyways, cheers