Implementing a slider ON an axis

I am built a model that solves a 1D transport problem (upper plot) and now I want to add a second plot that shows the breakthrough curve at a given point. Is there a way to implement a range slider ON the x axis of the upper plot to determine the location of the breakthrough curve of the lower plot? Not sure whether this is important, but the range of the upper x-axis is adjustable too 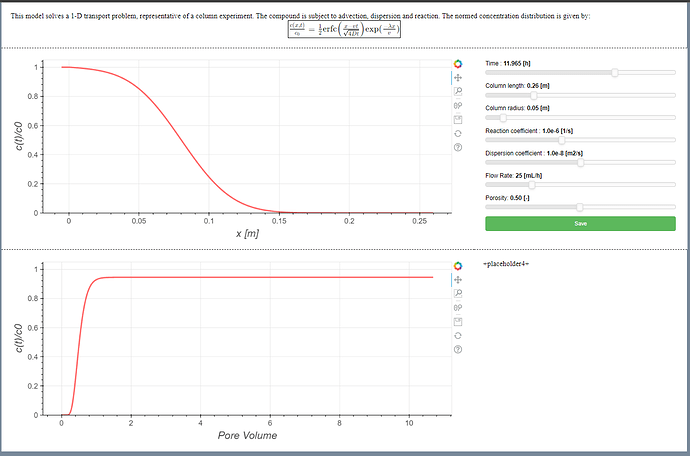 The way I think about it, essentially you can control the range of the x axis 2 different ways, but both ways are actually quite flexible thanks to CustomJS access of the models:

Now you can dynamically control the args of BOTH of these via the magic of CustomJS, meaning for example, you could set the second figure’s x_range to a Range1d(start=0,end=10), but then every time a slider gets moved, trigger that callback, which does some calculation, like find where c(t)/c0 on the second figure reaches say 0.99, then update the figure’s x_range.start and end based on that.

OR, alternatively, and probably more conveniently based on what I think you want…you can set the x_range on the second plot to the x_range of the first plot → that’ will “tie” them together. Like this:

Hopefully this all makes sense, don’t hesitate to post a dummy example if you’re stuck on anything.

If you are asking about a UX control, there is a RangeTool (but note that it renders inside the plot as an overlay, not on an axis).