As show in the figure I have plotted information for kingdoms in an example data set. I want to write a CustomJS callback for the TapTool such that when a kingdom is clicked the plot updates with the information of the Groups in that Kingdom. That is a new plot is made with Groups in the selected kingdom. I have been trying this for very long and I wanted to know if this is really possible. Thanks in advance. 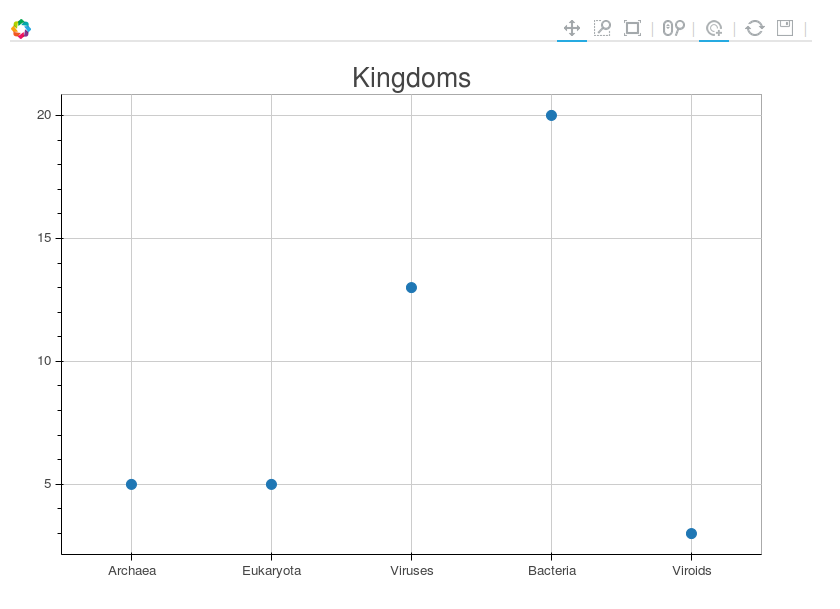 It's definitely possible. Here is a similar example from the User's Guide:

That example uses HoverTool, and updates the same plot, but it would be trivial to use a TapTool, and update a different data source (for a different plot), instead. For future reference, it's always a good idea to include actual code when you ask questions, it's hard to give any concrete advice, or ssay where you might have gone astray, without seeing what you have already tried.

Thanks for the reply I have attached the code here as you can see. I have checked the code quite a few times and couldn’t underastand whats going wrong. It might me something basic syntax. Please Help me!

I apologize but unfortunately I do not have the time to dig into this in detail, especially since I can't actually run it without actual data (tho perhaps someone else will be able to). But I can offer some general advice:

One really nice thing about JS callbacks is that they make debugging in the browser easy to do. You can put a line "debugger" in your JS code, then you run your script like this:

Then you open the page with browser "dev tools" enabled, the code will stop on the "debugger" line and open in the JS debugger, and you can examine the values of the variables, single step through the JS code, etc.

I would also recommend starting from a known working place, and incrementally adding/changing it. So, start from the example I linked earlier, and first make it work with a tap tool instead of a hover tool, then incrementally add in new data sources/glyphs more like your actual data, in small steps. This will let you have some idea what step might actually be causing a problem.

The debugger trick has worked. Thank you very much for the great help. But I just have one more problem. I wanted to know how to change the x_ranges in a figure plot by using a CustomJS callback for a button. For, example I have given the code here

I thought this would be the possible default way to do it. But it seems not to be working. Thanks again

Do you actually have multiple x_ranges? If some then it might be somewhat tricky. If you just have the one default one (typical) then it is "x_range" not "x_ranges".

I will also add that if that does not work you might try setting the start and end on the the existing range, rather than replacing it with new range, e.g.:

There may be an update/event not triggering bug when ranges are replaced wholesale.